Cream of Costa rises to the top 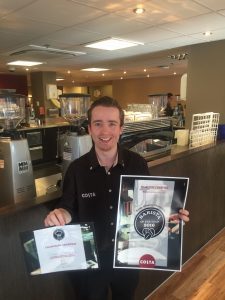 Every year Costa Coffee goes on the look-out for the top talent within its ranks, in order to uncover who is worthiest of the coveted Barista of the Year title.

A celebration of the art of coffee-making, this competition is just one of the ways Costa is working to recognise the hard work of its people and reward those who continue to deliver a service in line with its standards of excellence.

Open to all 17,000 Costa Coffee baristas, the competition is fierce and the pressure high but just like in a cup of coffee, the cream always rises to the top.

But, in order to identify the finest pedigree, those competing are subject to a series of heats and are judged on a number of elements including technical skill, presentation and personality. Getting these right is crucially important for a barista to progress in the competition, but it is the passion for their craft which sets apart the best from the brilliant.

Whoever makes it through to the final heat and impresses the judges is crowned the Champion of Champions. Previous winners have walked away with promotions to significant senior positions within Costa as well as cash prizes, holidays and iPads!

At Sim Trava, we are really proud of one our own, Dan from our Bury Rock store, who represented the company at the north individual franchise heat.

Dan sailed through the store heats and was named the Sim Trava Barista of the Year at our headquarters in July. Following this win, Dan got straight to work undergoing intensive training with members of the senior team to get Dan to the top of his coffee-making game.

Taking to the stage at the Leeds Academy earlier this week, Dan was first up and impressed the judges with his ambitious and well-executed speciality drink – the Split Passionality – as well as with his overarching understanding of coffee and the characteristics of each bean.

We hope you will all join us in congratulating Dan for his hard work and in getting as far as he did in the competition – we are proud to have had you representing the Sim Trava family and you’re still the Barista of the Year to us. Until next year!