Five minutes with: Ashley Owens – A rising star of the Sim Trava family 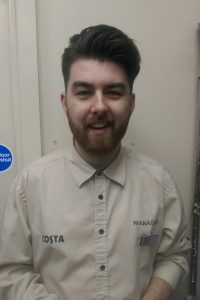 As part of our ‘five minutes with’ blog series, we talk to store manager, Ashley Owens, about his progression up the ranks throughout his seven-year career with the company.

When I left school at 16, I tried a range of different jobs but none were very “me”. I tried sales but didn’t enjoy the cut-throat environment, I worked in different bars but none of these roles had longevity or career prospects. At one point, I even took a job unloading wagons in the morning at the markets!

I always knew I liked working with people but I just hadn’t yet found a role that suited me that I enjoyed or came with any real career prospects.

That was until I seen a job advertised with a Sim Trava-owned Costa Coffee store in Oldham seven years ago. The trainee barista role sounded interesting and varied with real career progression so I decided to apply. I was called for an interview and got on really well with the panel. A few days later, I got a phone call to say I had landed the job – I was delighted.

I started as a trainee barista in 2009 and was determined and ready to get trained up. Within four months I was a fully-trained barista, and had impressed my manager so much that they decided to put me forward for barista maestro training. I made it my mission to pass training and progress my way up through the ranks.

When I reached grade four, I was considered an ‘assistant manager in waiting’ which meant that if an assistant manager role came up, I would be on the list to get the role. My opportunity finally arrived in 2013 when I was appointed assistant manager at Oldham ICC. I did this temporarily, spending six months here. Although I didn’t get the job on a permanent basis It made me want it even more.

My second opportunity as assistant manager came seven months later when I was appointed assistant manager at Oldham ICC store for a second time. I was there for just over a year and during this time, I completed an NVQ qualification in team-leading with the assistance of my assessor, the recently appointed Academy manager, Brad. This was a great experience and I learned a lot of valuable skills including how to manage people in a busy hospitality environment.

It was at this point that one of our directors, Jim Smith, got in contact with me. He was impressed by my hard work in Oldham ICC, as well as my dedication and loyalty to the company over the past seven years. He knew I was a hard-worker, delivered good results and so wanted me to have the opportunity to further prove myself.

This opportunity came in the form of a relief store manager role at Openshaw. It’s one I have grown into and really enjoy on a daily basis. I’ve been in this role for four months now, providing additional support and cover whilst they find a permanent manager. While this is only a temporary role, I really feel I am growing more in confidence as the weeks and months pass and so I’m looking forward to one day becoming a permanent store manager.