Picking up our second accolade in as many weeks: Family Business of the Year! 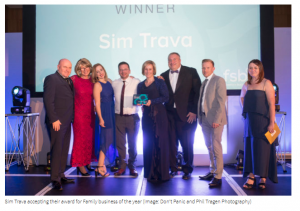 We’re thrilled to say that this week we were named Family Business of the Year at the Federation of Small Business’ (FSB) Greater Manchester and North Cheshire awards.

We joined around 300 others at the Ceremony in Manchester to celebrate the very best of business in the region – and were delighted to come home with one of the most highly contended gongs!

The judges cited our knowledge of the competition, financial success, and most importantly, commitment to our team, as key reasons for selecting us as winners. We can’t deny that we’re absolutely delighted to have received this recognition, as we’ve worked tirelessly this year to grow the team, take on number of new apprentices, and open a number of brand new stores, as well as growing our learning and development Academy.

The award is the second we’ve been presented with in as many weeks – after we were named Costa Coffee Partner of the Year last week in a ceremony which recognises top performing Costa franchise partners for their contribution to the brand.

It’s safe to say we’re celebrating in the office this week! And, they say good luck comes in threes so let’s see what the next one brings!